If you have doubts about your partner or employee and suspect that you are being followed, this article is for you.

Here you will learn how to use special apps to find a hidden camera and other similar devices.

Browse through this overview of the best spy camera detector apps and choose the best one for you.

The camera uses electromagnetic fields to detect the hidden camera. It makes sound signals if there is a positive match.

To detect, you need to bring your phone to the intended location of the hidden camera or microphone.

Wait for its response.

If an object that can record is detected, the corresponding inscription will appear.

The app Hidden Camera Detector will cause your smartphone to pick up flares that are specific to cameras. 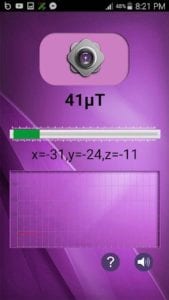 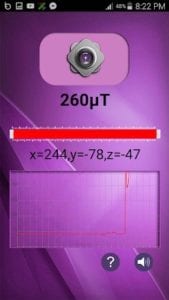 In this way, it detects them even at a considerable distance.

You may also like: How to remove spy apps from your gadget

To do this, the application Hidden Camera Detector: CCTV Finder uses a geolocation system.

It allows you to quickly and easily find hidden cameras placed nearby.

Before you start, calibrate your phone with the app to get a better spatial orientation.

This should be done by describing several octaves in the air, as is done when calibrating the compass.

The detection is as follows. In the room where the hidden camera can be located, the smartphone is moved and a light white circle is tracked. 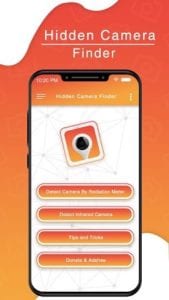 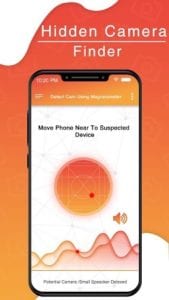 This circle signals the presence of the device you are looking for.

The Spy and Hidden Camera Detector application will allow you to easily locate a hidden camera that is not far from you.

Your phone screen will show you the approximate location of the camera or other devices. This is to give you an idea of where to look in more detail.

When you start the app Spy and Hidden Camera Detector, a red circle flashes on the screen when your smartphone is near the camera.

The scanner also detects other types of hardware. You should pay attention to the number in the middle of the screen.

If the number exceeds 100, then the camera is detected. 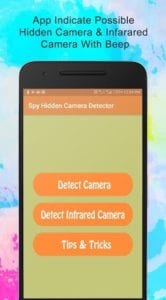 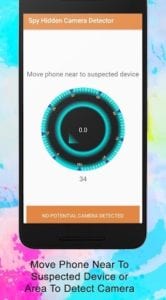 The application Spy and Hidden Camera Detector also has an IR mode that allows you to find cameras that were not before detected.

For a more accurate magnetic sensor, move your phone’s camera as close as possible to a device. Most hidden cameras are invisible to the naked eye.

They remain on objects that are least likely to be suspected. An infrared camera helps you get a wide-angle view of your room.

All you need to do is keep an eye on white light.

So it can emit sounds in unexpected places, even if there is no lens near the object.

But, to remove false alarms, it is enough to calibrate the sensitivity of the magnetometer in the range of 60 to 80.

With the Hidden Camera Detector 2019 Spy Camera Detection application, you can find hidden cameras in any room.

For more accurate readings, you should calibrate the application Hidden Camera Detector 2019 Spy Camera Detection on your phone.

Adjust the sensitivity of the camera. So that the app Hidden Camera Detector 2019 Spy Camera Detection will be able to recognize all suspicious devices more accurately.

This application also has an infrared camera mode. This will allow you to detect hidden objects in the room where you are.

In the application’s information section, you will learn a lot of useful tips. 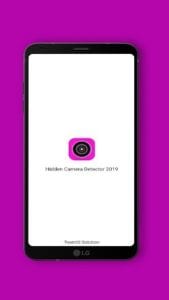 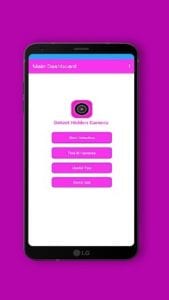 For example, the app tells you which parts of the room are the best places to look for hidden spy cameras.

To do this, your mobile device must have a special sensor. All modern devices have this tool.

Enable the application Hidden Camera and Mic Detector and move your phone around the room where you want to find the hidden camera.

The application Hidden Camera and Mic Detector will analyze the magnetic activity around you and your phone.

If it recognizes suspicious activity, you will see a notification on your phone. The app Hidden Camera and Mic Detector will also issue a special beep to alert you if a hidden camera is detected. 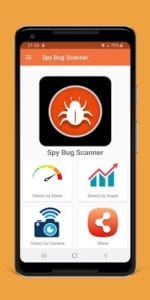 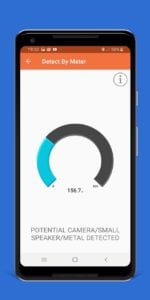 This free app will allow you to use all its functions without restrictions. There’s no built-in shopping or annoying advertising.

It is an excellent tool for this purpose. Moreover, it is completely free and works very well and quickly.

First, you need to calibrate the application Hidden Camera Detector 2019 – Spy Device Detector. It will take a few seconds and will happen automatically.

To update the application’s performance, you need to shake the phone several times.

Detecting hidden spy cameras takes little time and is done with a couple of clicks. 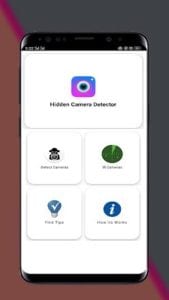 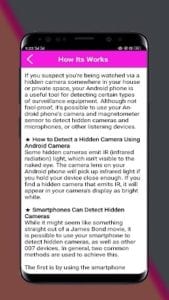 If you find a hidden camera, the application Hidden Camera Detector 2019 – Spy Device Detector will notify you with an audible alert and a text message.

With the Hidden Camera Detector application, you can find spy cameras wherever and whenever you want.

Stand in the center and mentally divide the room into parts. Then check each sector with your phone and this app.

Examine each sector, paying attention to anything that seems suspicious. There may be double objects in the room.

Check the electrical appliances for protruding wires or suspicious glow. CCTV devices are placed so on provide a better view.

So get close to places such as the bathroom, bed and exit doors with your phone. It is very important to check places where people can talk.

If the attacker’s purpose is to record the conversation, bugs can be placed in such places. 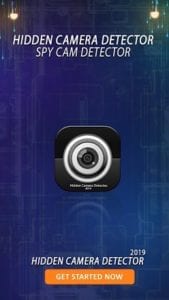 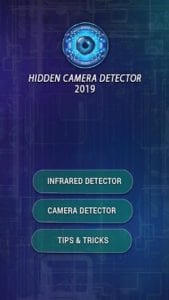 Particular attention should be paid to beds, tables, sofas, chairs, and balconies.

The essence is that you install the application Hidden camera detector – Spy camera finder on your phone.

Then you begin to move your phone in the room or in an area where there is suspicion of the presence of a hidden camera.

Where there will be an increased density of the field, there may be a camera behind a wall or inside an object.

The hone screen shows you the approximate location of the camera or similar device. The radio detector only detects wireless devices that send information.

What about standalone devices that store data on the SD card? In this case, it may be useful to have a camera detector that detects the reflection of light from the camera lens. 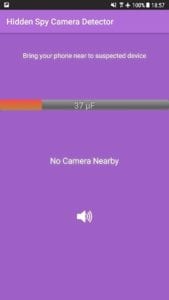 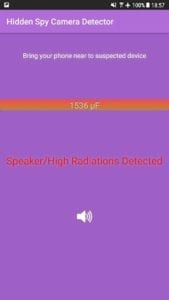 It is also present in the application Hidden camera detector – Spy camera finder.

It also detects any other spy devices that produce similar magnetic waves.

In unfamiliar places, you may suspect that there is a hidden camera somewhere near you.

With this application, you can protect yourself from such surveillance.

It will start the process of searching for hidden cameras. Move around the room and get close to where the spy camera is most likely to be. If detected, you will hear a special signal. 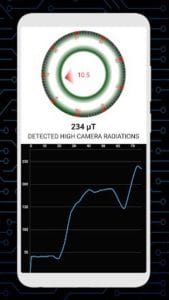 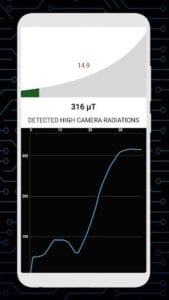 This tool will help you secure yourself in unfamiliar places. The application Hidden camera detector is absolutely free and easy to use.

Get rid of negative suspicions and find out where the hidden spy cameras are located.

First, you can manually check all available places for spy cameras.

Then turn on the detector on your phone and move around the room.

Your phone will start to vibrate as you approach the spy camera. The closer you get to the hidden camera, the more your phone will vibrate. 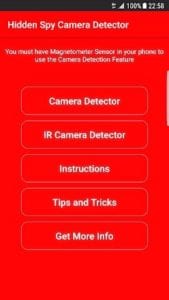 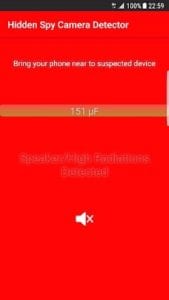 This is how the application Hidden camera detector reacts to the magnetic waves generated by the hidden spy camera.

You may also like: 9 Best hidden voice recorder apps for Android & iOS